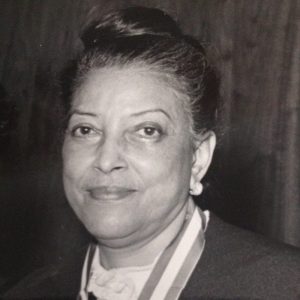 Hon. Lucile A. Watts (1920-2018) was the first African American woman to serve on the Circuit Court in Michigan. Lucile grew up in Alliance, Ohio, then attended the University of Detroit and graduated from Detroit College of Law in 1962. Women were not typically hired by law firms at that time, so she started her own firm. After a successful campaign for Common Pleas Court in 1978, Lucile then ran and was elected to the Third Judicial Circuit Court in 1980.In addition to her professional achievements, Judge Watts impacted her community in many important roles. She served as a board member at Focus: HOPE for 20 years, Woodward Academy and the YMCA of Metropolitan Detroit. Lucile was a founding member of the Black Women Lawyers Association of Michigan, a lifetime member of the NAACP and a National Honorary Member of Distinction of the Gamma Phi Delta Sorority. She was also honored by the National Council of Negro Women for her international work with the rights of women and children.