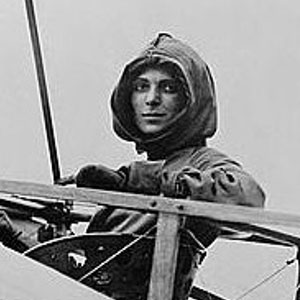 Although her career as a pilot lasted a mere 11 months, Harriet Quimby left an indelible mark on aviation history as both the first American woman to become a licensed pilot and the first woman to cross the English Channel.

A gifted journalist with a deep love of the theater, Quimby first made a name for herself as a writer at Leslie’s Illustrated Weekly. In 1910, she accepted an assignment to cover the Belmont Park International Aviation Tournament. She befriended John Moisant and convinced him to take her on as a student, even though the Wright brothers were dead-set against women in the air. Quimby earned the 37th license in American aviation history, the first for a woman. Less than a month later, she won her first cross-country race.

Quimby began touring with the Moisant International Aviators and performing at flying exhibitions. Understanding the power of drama, she created a look for herself which became her trademark: a purple satin flying suit with a hood. She instantly caught the public’s imagination and chronicled her adventures in articles for Leslie’s.

On April 16, 1912 Quimby departed from Dover, England in a borrowed plane that she had never flown before, and with no instruments except a compass she had just learned to use. Despite poor visibility and fog, Quimby landed 59 minutes later near Hardelot, France. The world would not hear of her accomplishment, however, because the Titanic had sunk the day before. Just three months later, Quimby fell to her death when she lost control of her plane.