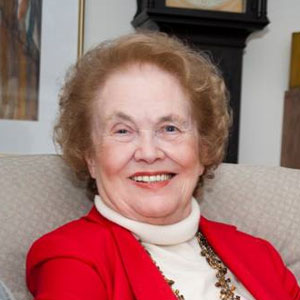 In 1979, Dr. Beckwith negotiated a lease with the City of Lansing for the Cooley Haze House, which became the home of the Michigan Women’s Historical Center and Hall of Fame. Dr. Beckwith served as both the unpaid Executive Director and the President of the MWSA for more than 30 years. She maintains an active role in preserving women’s history in Michigan and serves on the Friends Board of the MWSA. Dr. Beckwith’s work and foresight made Michigan the first state in the nation to have a museum solely dedicated to women’s history and Michigan remains one of only a handful of states to have a Women’s Hall of Fame.

In addition to teaching at Michigan State University for 32 years, Dr. Beckwith served on the Lansing Board of Education for 18 years. In 1996, she was the recipient of MSU’s Presidential Award for Community Service. In 1998, the Michigan Women’s Foundation presented her with the Women of Achievement and Courage Award. In 2005, the Detroit News named her one of 12 ‘Michiganians of the Year.’