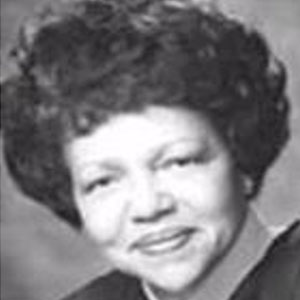 Geraldine Bledsoe Ford was the first black female in the United States to be elected to a judgeship. Born in 1926 in Detroit to attorney Harold E. Bledsoe and state civil servant Mamie Geraldine Bledsoe (herself a 1983 Michigan Women’s Hall of Fame honoree), Geraldine grew up in an atmosphere rich in discourse on the law, politics, and social equality. With actor, orator, and rights activist Paul Robeson a frequent dinner guest, as well as the preeminent community and civil rights leaders of the day, Geraldine was raised in an intellectually charged atmosphere that inspired achievement.

Her natural leadership qualities were apparent early. Ford was selected from a national pool of top high school students to meet President Franklin D. Roosevelt at the White House, before she graduated from Northern High School in 1944. Ford received her bachelor’s degree from the University of Michigan, and went on to earn a law degree in 1951 from Wayne State University. To gain legal experience after passing the Bar, Ford joined her father’s firm, Bledsoe, Ford and Bledsoe, which subsequently included her brother, William Bledsoe. Once a seasoned attorney, Ford channeled her expertise into public service, becoming the first black woman to attain the position of Assistant U.S. Attorney for the Eastern District of Michigan. Later, she would be distinguished as the first black woman to serve as Assistant Corporation Counsel for the City of Detroit.

Her most significant achievement against the greatest odds, however, would come in 1966, when she scored a stunning, upset victory to serve as judge on the Detroit Recorder’s Court. Although a black woman had never been elected to the bench before without benefit of prior appointment in the history of the United States, and her candidacy was surrounded by clouds of skepticism, Ford’s qualifications swept the election and she led the ticket repeatedly for the following 33 years. After a court reorganization, she served another year as a Circuit Court Judge, before retiring in 1999.

Ford participated in many professional organizations, served in appointed positions such as the Michigan Gaming Commission for Governor Engler, and received many prestigious awards, including an honorary Doctor of Law Degree from Alma College, the Distinguished Black Alumni Award from Wayne State University, and the Spirit of Michigan Award from the U. of M. Alumni Association, for which she served as the first black president.

Judge Geraldine Bledsoe Ford found it necessary to focus on the retention and development of students at the University of Michigan as a central component of the actualization of affirmative action. That actualization has allowed for the further development and service to the entire community that would otherwise not have been realized had it not been a focus need for African American professionals to be included in the mainstream and heart of American society.