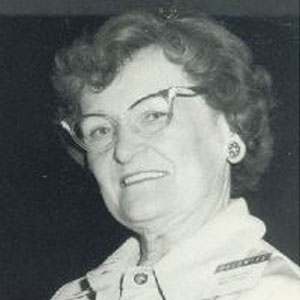 Fran Harris of Westland began her broadcasting career at a time when that was not the province of women. She began by doing a commercial program in 1930 and then progressed to doing “women’s features.” In 1943 Fran Harris became the first woman radio newscaster in Michigan (on WWJ). In 1946 she was the first woman on television (on WWJ-TV) and had the first woman-run television show in Michigan. Of the many shows she created, a format that still runs today, is the television “courtroom” program, Traffic Court. Radio and television tapes of Fran’s broadcast scripts along with her autobiographical tape are included in the archives of Broadcast Pioneers in Washington D.C.

Along with broadcasting, Fran Harris also was the first woman to serve in broadcasting at the corporate level (WWJ) in 1964. In 1949 she was presented with the George Foster Peabody Award (broadcast’s Oscar) for her radio program dealing with problems of sexual deviants. Her awards are numerous and include her selection by the Secretary of Defense in 1973 to chair the Defense Advisory Committee on Women in Service. During her appointment, the Navy appointed the first woman admiral. Harris was the first woman–and only broadcaster–installed in Michigan’s Journalism Hall of Fame in 1986. Again, in 1987, she was the only woman ever selected to win the Governor’s Award from the National Academy of TV Arts and Sciences (EMMY) in Detroit. She has served on many community boards and encouraged many young women to enter the broadcasting ranks. Impatient with being called a trail-blazer, Fran Harris said, ‘I never dwell on discrimination. I just roll with the punches and move on. You accomplish more that way.’

From 1971 to 1973, she was national president of Women in Communications, Inc., during which time the organization changed its name from Theta Sigma Phi, voted to admit men to membership, and doubled the dues.

In addition to her work in broadcasting, Fran established an Associate Degree in Child Care Administration at Ferris State University. She was appointed to the Status of Women Commission by Governor Swainson in 1963 and then served through 1976 with appointments by Governors Romney and Milliken. In 1977 Fran Harris wrote Focus Michigan Women, 1701-1977 under the auspices of the Michigan Women’s Commission in honor of the International Year of the Woman.