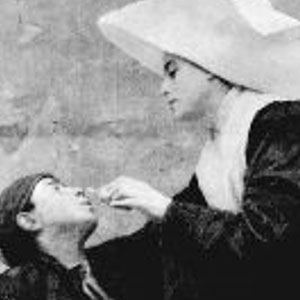 In 1844 the four Sisters of Charity: Sister Servant Loyola Ritchie, Sister Rebecca Delone, Sister Felicia Fenwick and Sister Rosaline Brown emerged from a 500-mile wilderness journey onto a muddy Detroit street. They had come to Detroit to reinstate the Catholic school system. Within a quarter century they had the school system rebuilt, educating more than 600 children in schools founded in 1844 and 1859. However, education was not their only mission. In 1845 they established St. Vincent’s Hospital, the first hospital in Michigan and the entire Northwest Territory. Another hospital, St. Mary’s, was built in 1850. The four Sisters put together the first outpatient clinic in Michigan and the second in the nation, St. Mary’s Free Clinic in 1851; followed in 1852 by St. Vincent’s Orphan Asylum, the first Catholic orphanage in Detroit. The sisters were also concerned with mental illnesses and in 1860 established the Michigan State Retreat for the Insane, the first private psychiatric hospital in Michigan. The House of Providence, a place to care for unwed mothers and their offspring came about in 1869.

The first four Sisters of Charity in Detroit embraced situations that were physically dangerous, emotionally draining, and spiritually challenging with commitment, faith, and unremitting love. They serve as a positive example to the youth and women of Michigan. Orphans, people deemed insane, those with contagious, killing diseases, and the uneducated–all were considered worthy of tender care. In addition, the Sisters were dedicated to advancing the status of women in society by helping the most unfortunate female victims whom society had labeled scandalous sinners. The Sisters took in foundlings and pregnant young women working the streets as prostitutes, giving them a chance at a better life.

Detroit’s original Sisters of Charity laid the groundwork for institutions that dramatically affected the health and welfare of countless numbers of Detroit area residents for one hundred and fifty years. Their mission of “respect, quality of service, simplicity, advocacy for the poor and inventiveness to infinity” thrives today in two Detroit institutions–Providence Hospital and Medical Centers, a major healthcare system, and the St. Vincent and Sarah Fisher Center, a child welfare agency and home.