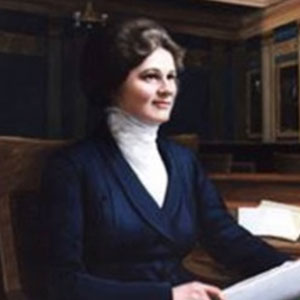 After winning a seat in the state senate in 1920, Eva M. Hamilton became the first woman to be elected to the Michigan Legislature. She served on four committees, banks and corporations, taxation, normal schools, and insurance and chaired a fifth, the industrial schools committee, which oversaw the state’s training schools for juvenile offenders. Hamilton came to Lansing determined to work for women and children. Her first speech in the Senate Chamber argued for the passage of a bill requiring applicants for marriage licenses to supply proof that they were free of sexually transmitted diseases, diseases that she felt condemned women to a form of involuntary suicide. Although the bill did not pass, one of her successful bills raised the mill tax in certain cities to fund pay raises for teachers. One of her greatest achievements was her work on Senator McArthur’s 1921 bill to reform the Michigan Mothers’ Pension Act. Laws such as this were revolutionary because they provided public funds for maintaining underprivileged children in their homes rather than in institutions.

Hamilton’s political and civic involvement did not begin with her election, however, nor did it end with her unsuccessful second term bid. In 1912, while working on a major state referendum on women’s suffrage as well as the Michigan mothers’ pension legislation, she began a successful fight to establish the first farmers’ retail markets in Grand Rapids. Her battle, which culminated in 1917, ended civic ordinances prohibiting farmers from selling directly to customers and helped combat the rising cost of city living. After serving as a state senator, Hamilton remained socially active, focusing on initiatives designed to encourage women to take a large role in civic affairs. One of these was the Michigan League of Women Voters, established in Grand Rapids in 1919 and today known as the League of Women Voters of Michigan.

Photo Courtesy of Archives of Michigan