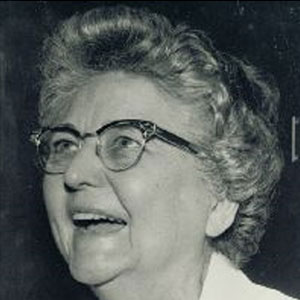 Ethel Calhoun, M.D. pioneered use of the techniques of Sister Kenny for the treatment of polio at a time when the accepted treatment for polio was the application of splints and casts. Dr. Calhoun utilized the Kenny methods of using moist hot packs, therapy, and exercise to successfully rehabilitate many who were afflicted with the disease.

Dr. Calhoun received her B.A. degree from Western Reserve University in Cleveland and an M.D. from the University of Michigan. She was one of seven women physicians graduating in 1925 out of a class of 156 doctors. She practiced medicine in downtown Detroit for five years, but gave up her practice after the birth of her son.

Dr. Calhoun met Sister Kenny at a medical meeting, and later continued her study of the Kenny Method at the University of Minnesota. During polio epidemics in the 1940s and 50s, Dr. Calhoun supervised Kenny care at the Oakland County Contagious Hospital. Here she demonstrated her commitment and dedication as she sometimes worked for twenty-four hours at a time to save children afflicted with polio from crippling debilitations.

Dr. Calhoun was honored at the White House in 1964. In 1975 the Altrusa Club selected her as the Woman of the Year. In addition, she was named one of Detroit’s ten top women who work, and honored by the Michigan State Medical Society for fifty years of dedicated service.