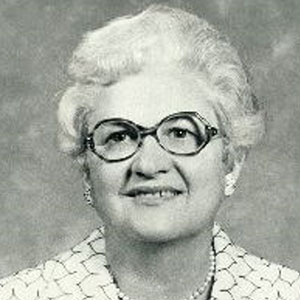 Elly M. Peterson was born Ella Maude McMillan in New Berlin, Illinois, but it is as a Michiganian that she was best known, having acquired success in the rough and tumble world of Michigan politics. As her close friend Sue Koziol of Jackson noted, “Elly’s major contributions were to get women involved, interested, and knowledgeable in the political process.”

Not only was Peterson involved herself, she preached the necessity of involvement for women, and pointed the way for countless others to follow. In so doing, Elly Peterson earned a very special place in Michigan’s political history.

Peterson was the first woman in Michigan’s history to chair a major political party and to be nominated for the U.S. Senate. She was also the first woman to be assistant chair of the Republican National Committee twice and, with Liz Carpenter, to serve as national co-chair of ERAmerica.

While seeking to advance her party’s interest at both the state and national levels, Peterson also sought to advance the cause of women, not just in politics, but in all other respects as well. It was this concern that led her early on to become an advocate for the cause of equal rights for women, and which led her to become a charter member in the National Women’s Political Caucus, the Women’s Educational Fund, and the Women’s Campaign Fund.

It has been said that Elly Peterson was a woman, a feminist, and a Republican, in that order. Because her priorities were thus formed, she often in late years found herself in conflict with dominant power figures, male and female, within her own political party with respect both to issues and candidates. This led her to rebel against the 1980 Republican national platform which for the first time in history was silent on the cause of equal rights for women, and to her 1982 rejection of her party’s candidate for governor. If a symbol of political courage for women is wanted, Michigan’s Elly Peterson could very well serve as the model.