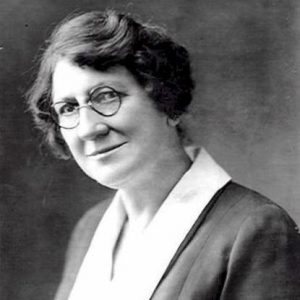 In 1887, Ella Mae attended Northern Indiana Normal School for business training. Afterwards, she learned stenography and secretarial work at Ferris Industrial School in Big Rapids. Hired by the law offices of Pratt & Davis in Traverse City in 1891, she studied law to be more useful to her employers. They later encouraged her to take the bar exam. Ella passed and was admitted to the bar in Traverse City on August 20, 1895.

In her position as Clerk in the Grand Rapids U.S. Attorney’s office, she performed the same duties as an Assistant U.S. Attorney in addition to her clerking duties. Ella became well-respected among her peers for her in-depth knowledge of federal law and procedures and was kept on through six consecutive U.S. Attorneys. In 1922, newly-appointed regional US Attorney, Edward Bowman applied to Washington D.C. for a salary raise for Ella in accord with her nineteen years of service. He was told that if Ella was promoted to Assistant Attorney while retaining her duties as a clerk, she could have the $1,800 per year raise. On September 1, 1923, Ella was installed as the first woman Assistant U.S. Attorney for the Western District of Michigan.