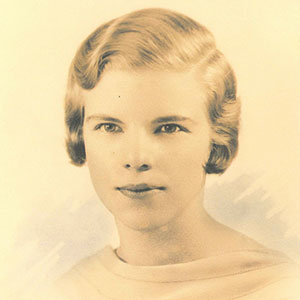 Elizabeth Sparks Adams was an outstanding leader and advocate of Michigan history. Born in Romeo, and later moved to Waterford Township, Adams’ contributions to the state of Michigan are unexcelled. She received her A.B. in History from Eastern Michigan University in 1934 and was awarded a State College Fellowship to attend the University of Michigan, receiving her M.A. in 1935, with her thesis “Women in the Antislavery Movement.”

That same year Adams began working as a research assistant at what is now the University of Michigan Bentley Historical Library, becoming its first curator in 1938. Upon her departure, she was named an “Honorary Curator of the Michigan Historical Collections,” a lifetime achievement awarded by the University’s Board of Regents.

In 1940, at the age of 29, Adams became the first woman appointed to the Michigan Historical Commission. She served in that office for 54 consecutive years, retiring at age 83 in 1995—the longest serving member of any State of Michigan board, commission, committee, or public office in Michigan history. In 1947, Adams became the first woman president of the Historical Commission, a post she held for 14 years. She also helped establish Michigan’s Centennial Farm and State Historic Marker programs.

Adams served on numerous committees and boards such as the Historical Society of Michigan, being the first female president (1950-1951); Oakland County Pioneer and Historical Society (for 50 years); and the Waterford Township Board of Education, where she chaired the committee that named new schools, ensuring outstanding Michigan women Eliza Seaman Leggett and Della Lutes were honored.