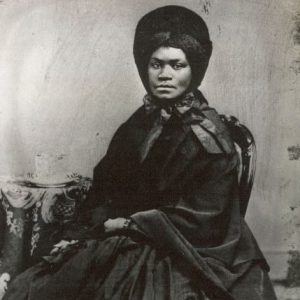 Elizabeth (Lisette) Denison Forth (1786-1866) of Macomb County was born into slavery. She won her freedom by escaping with one of her brothers to Canada after a court ruling by the Michigan Territory Supreme Court in 1807 which stated that escaped slaves who established their freedom in Canada could not be returned to slavery upon return to the United States.

Elizabeth returned to Detroit a free woman by working as a domestic servant in Solomon Sibley’s household, the first Mayor of Detroit. In 1825, Elizabeth purchased 48 acres of land in Pontiac, which today forms part of the Oak Hill Cemetery, making her the first African-American and one of the first women to own property in the territory. Never living on the property, she leased it to her brother for farming. Elizabeth also invested money in the first steamboat built in the upper lakes, Walk-in-the-Water, and Detroit’s Farmers and Mechanics Bank.

In 1831, Elizabeth began working for Detroit Mayor John Biddle and his wife, Eliza with whom she became close friends. Even after leaving their employ, she joined them in Paris when Eliza fell ill. Both women had attended the same church for many years and they made a pledge to donate funds to build a church. After her death, Elizabeth left a portion of her estate for the building of St. James Episcopal Church, Grosse Ille. Eliza Biddle’s sons donated the land and oversaw the building of the church in accordance to both women’s wishes. The church continues to be an active congregation to this day.