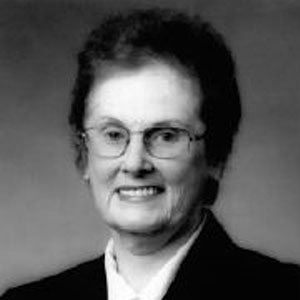 Eleanor M. Josaitis co-founded Focus: HOPE with Father William T. Cunningham (1930-1997) in the aftermath of the 1967 Detroit riots to bring the community together to overcome social injustice and build harmony. Since its establishment in 1968, Focus: HOPE has grown to more than 9800 colleagues supported by more than 51,000 volunteers.

As a wife, mother of five children of her own, and grandmother to seven grandchildren, Josaitis worked tirelessly to institute programs such as Focus: HOPE’s 1971 Food Prescription Program which distributes USDA commodities to infants, pre-school children, and pregnant and post-partem mothers. Its impact is evident; 21 states have now benefitted from Focus: HOPE’s example, feeding hundreds of thousands of people every month. In 1981, largely due to Josaitis’ leadership, the food program was expanded to provide benefits to low-income, elderly persons.

As a result of her commitment to helping other people, thousands of men and women, who would otherwise be unemployed or dependent on welfare, have gained meaningful job skills through a variety of innovative educational and training programs at Focus: HOPE’s Machinist Training Institute and the Center for Advanced Technologies. Students in these programs can place their children in Focus: HOPE’s Center for Children, a world-class Montessori day care facility, while they continue their technical training.

Her work to help people enter the economic mainstream has been recognized with numerous awards for her courage, tenacity and passionate vision, including The Detroit News Michiganian of the year Award, National Council of Negro Women Achievement Award, the Career Guild’s Woman of the Year, and Anti-Defamation League’s Women of Achievement Award. She also received the National Council of Women in the United States Women of Conscience Award.

Ms. Josaitis served on advisory boards of the Urban Institute’s assessment of the New Federalism Dissemination, the Robert Woods Johnson Foundations’ Partnership in Training, and the University of Detroit Mercy Leadership Development Institute. Because of her efforts, people of all ages have been able to move from the darkness of poverty into the light of prosperity.