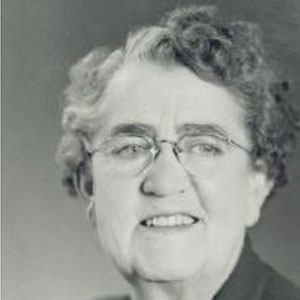 Elba Lila Morse epitomizes the ‘health care professional’ concept. Her lifelong career as a registered nurse led to the creation of many outstanding health programs as well as facilities. Morse’s motto “It’s for the children, you know,” became the rallying cry behind which many needs were met and services instituted.

Morse’s professional life began immediately upon completion of her nursing education in 1909. As a nursing supervisor for several years, she worked with a prominent obstetrician, gaining valuable experience as she assisted with complicated deliveries. In 1921 she was appointed by the Red Cross as one of the first public health nurses in Michigan. In her prior experience with the Red Cross, as a nurse during WWI, Morse was responsible for recruiting large numbers of nurses for the military. Perhaps her most fascinating experiences came when she served as a disaster nurse, organizing and providing help for victims of an Illinois cyclone, a flood in Dayton, Ohio, and aiding the survivors of the Bath (Michigan) High School bombing.

Her efforts did not go unnoticed, and in 1928 the executive director of the newly created Children’s Fund in Michigan asked Morse to join the staff, which she did in 1930. A year later, the Northern Michigan Children’s Clinic was opened and Morse served as its superintendent for the next twenty-two years.

Still seeking to reach out where help was needed, Morse, with the help of Dr. Goldie Corneliuson, founded the Bay Cliff Health Camp which, was designed to be a summer camp for undernourished children in the Upper Peninsula. The Camp was to provide a place for children to grow and play in a healthy, nurturing environment. It still flourishes today providing services for children with any type of physical handicap and has served as a model for other camps throughout the country and the world.

Morse’s exemplary career has earned many honors and awards: she was selected Michigan Nurse of the Year in 1952; was the third recipient of the Senator Charles Potter Award for aiding the handicapped; and was selected as an official delegate to the 1950 White House conference on Children at Washington, D.C. Honorary degrees were conferred upon her from both the University of Michigan and Northern Michigan University.

Elba Morse died at the age of 93 in the Upper Peninsula where so much of her life had been spent and where her contributions will always be felt.