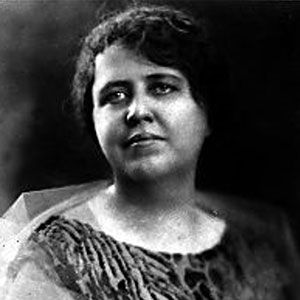 Edith Vosburgh Alvord devoted her life to others and left an enviable record of community service and influence as her legacy.

Alvord, born in 1875 in Battle Creek, entered Olivet College in 1895, an unusual pursuit for a young woman in that era. She graduated four years later qualified to teach English and Latin, and spent the next few years as a teacher in Morris, Illinois. She married Dr. W.R. Alvord in 1908 and lived in Detroit the rest of her life.

In the first decades of the century, women’s clubs were a primary avenue to community service and leadership for women; Alvord found an outlet for her energies and talents in the Twentieth Century Club of Detroit. In 1913, she became president of the club and a year later resigned to become president of the Detroit Federation of Women’s Clubs, where she worked avidly for women’s suffrage. An ardent clubwoman for the rest of her life, she served as president and as parliamentarian of the Michigan Federation of Women’s Clubs. During her tenure as president of the Detroit Federation, she persuaded the city health department to initiate an ordinance requiring bakers to wrap bread before placing it in markets.

Always a champion of education, she was the first woman elected to the Highland Park School Board in 1918, and served as treasurer from 1919 to 1928. During those years, she founded the first tax-supported nursery school, advocated recognizing the academic achievements of high school students in much the same way as students with outstanding athletic achievements were recognized, and helped establish a dental clinic in the Highland Park Public Schools.

Alvord also assisted in organizing the Women’s Auxiliary of the Salvation Army in 1914, served on the Wayne County War Preparedness Board in 1918, was a member of the Metropolitan Detroit YWCA board of directors, and represented Michigan at the Illiteracy Conference of Northern and Western States in 1922.

So well-known were her skills as an organizer, her advocacy for the rights of women, her compassion for the less fortunate, and her ability to make things happen that, in 1920, she was asked by the Women’s World Congress to run for president of the United States. Her response is not recorded, but it can be assumed that she politely declined.