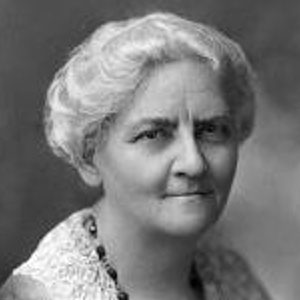 Born in Hart, Michigan, Edith Munger’s love of nature brought her to the forefront of the bird conservation movement in Michigan. Munger became the first female president of the Michigan Audubon Society in 1911. Under her leadership, the Society persuaded the legislature to repeal a law that was intended to protect chickens and provided a bounty for killing all hawks and owls. Affectionately called the “Bird Woman,” Munger spoke to audiences across the state, authored a monthly conservation column, and worked to develop educational materials about birds for schools. Munger also employed the then-new medium of radio to spread her message about the need to protect all forms of winged wildlife.

In honor the 25th anniversary of the Michigan Audubon Society in 1929, Munger spearheaded a competition to name the state bird. Over 190,000 votes poured in and lead to the robin becoming the state bird. “Thus thousands of men and women as well as school boys and girls were studying about birds, who had never before given their feathered neighbors a second thought,” Munger said of the successful competition.

As the first president of the Michigan Conservation Council and as the conservation chair of the Michigan Federation of Women’s Clubs, Munger lobbied women’s groups to abandon the common practice of decorating hats with the feathers of colorful, but rare birds. She also successfully lobbied for the expansion of Silver Lake State Park to include 1,500 acres of spectacular dunes on the Lake Michigan shore south of Pentwater. In 1926, Munger was the only woman invited as an expert to discuss conservation issues with newly elected Governor Fred Green.