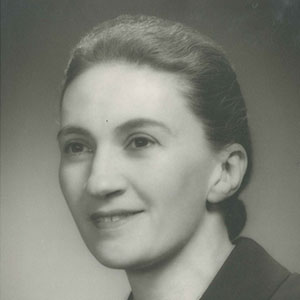 Dr. Evelyn Golden practiced medicine in Flint from 1936-1983, specializing in the care of women and children. “Effie”, as she preferred to be called, pursued medicine after her four older brothers died in the 1909 scarlet fever epidemic. In 1936, she was one of three women that graduated from the University of Wisconsin Medical School and became the first female intern at Flint’s Hurley Hospital, who converted a broom closet into a bedroom for her.

As Medical Advisor for Flint Community Schools, Effie was integral in the development of their Health Guarded Program; a model used by other school districts. She was the founding member of the Mott’s Children Health Center and provided hundreds of free physicals to girls so they could attend summer camp. She worked with the North End Soup Kitchen, Meals on Wheels, Urban League of Flint, Genesee County Women’s Traffic Safety Commission, and the Salvation Army. In her 80s, Effie taught exercises to other seniors, wrote monthly senior medical columns, prepared meals for the Senior Lunch Program, and was a language tutor for people new to the U.S.

Effie received numerous awards and honors from many of the organizations she served. The Flint Community Planned Parenthood Association gave her the Stewart R. Mott Leadership Award in 1985 and named their education wing after her in 2000. In 1989, she received the YWCA Nina Mills Woman of Distinction Award due to “exhibited qualities that would encourage other women to view her as a role model.”