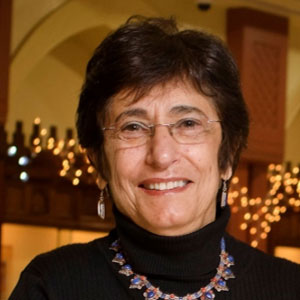 Born in Damascus, Syria and raised in Amman, Jordan, Dr. Anan Ameri’s life represents the hopes and dreams of all immigrants coming to America. Before coming to Wayne State University to earn her doctorate, Ameri worked as a TV producer, educator, and community organizer.

After earning her PhD in Sociology, she became the founding director and national president of Palestine Aid Society of America in Washington DC. She was a fellow at the Bunting Institute of Radcliff College and a visiting scholar at Harvard University’s Center for Middle Eastern Studies.

In 1997, Ameri joined the Arab Community Center for Economic and Social Services (ACCESS) in Dearborn, Michigan. She spearheaded the agency’s efforts to establish the first Arab American National Museum (AANM), a cultural treasure and trusted resource for Arab American history and culture. The AANM, opened in 2005, is as an ethnically specific institution that honors the ethnic diversity of our nation. Under Ameri’s leadership, the AANM received Smithsonian Affiliation, American Alliance of Museums accreditation, and numerous national awards, including the 2008 Coming Up Taller Award from the President’s Committee on the Arts and the Humanities for exemplary youth programming.

Dr. Ameri has a long history of mentoring and empowering young women. She is dedicated to advancing the influence of women in positions of leadership and community engagement. Throughout her long professional career and activism, she has nurtured opportunities for young women to peruse their dreams and excel. In addition to being a mentor, activist, and community organizer, Dr. Ameri is a scholar and accomplished author and novelist.