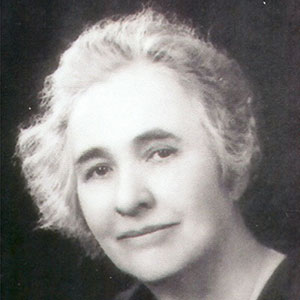 Dora Hall Stockman was a woman ahead of her time, a bold, progressive leader in politics, education, and agriculture. Born on a Manistee County farm in 1872, Dora Hall became a teacher at 16. She went on to attend Benzonia College and to earn a master’s degree in education from Hillsdale College. Dora and her husband, Francis Stockman, owned a mercantile business and later bought a farm on Lansing’s west side.

In 1914, Dora was elected Lecturer of the Michigan State Grange. This position, which she held for 16 years, was responsible for the program activities of the statewide organization. In addition to serving as editor of the Grange newsletter, called the Michigan Patron, Dora was instrumental in establishing the 4-Leaf Clover Club, a junior Grange that became the 4H Clubs of today.

Dora ran as a Republican for the state Legislature in 1938, serving four terms until she retired because of advanced diabetes in 1946. During this time, she introduced legislation that resulted in the Michigan Medical Insurance Program, the first of its kind in the nation. This was implemented as Blue Cross/Blue Shield, and Dora served on the organization’s Board of Directors until her death. Dora co-introduced legislation to require political parties to have two chairpersons, one of each gender, to increase the role of women in politics. Stockman’s legacy lives on in education, health care, politics, and agriculture throughout Michigan.