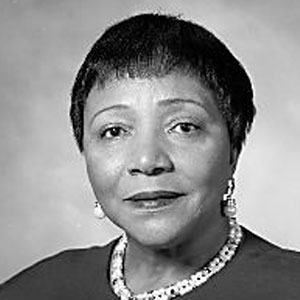 Della Mae McGraw Goodwin is founding dean of the associate degree program to prepare registered nurses at Wayne County Community College. At WCCC Goodwin created initiatives that have increased the admission, retention, and graduation of minority men and women in nursing. A distinguished health professional, she is recognized for her broad contributions as a community activist and advocate for vulnerable populations.

Goodwin has been an active participant in civic and health affairs in Michigan since 1955. Gaining prominence as an advocate for the medically indigent, in 1979 she earned election as board president of the federally designated, regulatory body, the Comprehensive Health Planning Council of Southeastern Michigan (CHPC-SEM). She was the first African American and woman elected to lead the white, male-dominated board which was an arbiter of health care dollars for the seven-county region containing 4.5 million people. Upon her retirement from Wayne County Community College in 1986, more than 2400 nurse candidates had graduated from the program she established. The admission, progression, and student support programs established through her leadership have resulted in the graduation of persons from diverse racial and ethnic backgrounds; 55 percent of them black and other minorities. Her work has allowed women of low income, with minimal employment opportunities and major family responsibilities to succeed and graduate to a more independent and economically secure lifestyle.

Her combined experience in the areas of health services planning and nursing education characterizes Goodwin’s commitment to equalizing opportunity for all persons. This commitment is evident in her advocacy for black hospitals, neighborhood health services, and minority personnel recruitment. Founding chairperson of the National Center for the Advancement of Blacks in the Health Professions (NCABHP), Goodwin now serves, without salary, as its president.

In the tradition of Mary Mahoney, the first African American registered nurse, Della Goodwin has paved the way for people of all races, genders, and ethnic backgrounds to provide better health services for all.