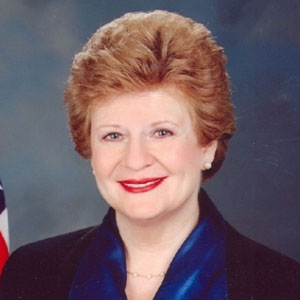 Debbie Stabenow made history in 2000 when she became the first woman from the State of Michigan elected to the United States Senate. In our nation’s history, only 33 women have served in the U.S. Senate. Debbie Stabenow is one of these exceptional women. Senator Stabenow’s rise to the U.S. Senate has been unique and has mirrored the advancement of women in politics. She is the only woman U.S. Senator to have been elected to local office, both houses of her State Legislature, and to both the US. House of Representatives and U.S. Senate.

From the beginning of her political career, Senator Stabenow has paved the way for Michigan women. Elected in 1974, she was the first woman and youngest person to chair the Ingham County Board of Commissioners. She served in the Michigan House from 1979 to 1990, rising in leadership to become the first woman to preside over the House. Senator Stabenow’s influence is evident throughout state law, from Michigan’s historic property tax cut to nationally acclaimed legislation to protect children and families. She served four years in the Michigan Senate and two terms as a U.S. Representative before her historic election to the U.S. Senate. Senator Stabenow continues to give voice to Michigan’s residents as a U.S. Senator. She holds the third-ranking Democratic leadership position in the Senate, the highest elected leadership position currently held by any Democratic woman. She is known as the point person on health care and prescription drugs. Senator Stabenow’s other successes include authoring the first-ever federal ban on drilling for oil and gas in the Great Lakes, leading efforts to pass a $2 billion tax cut giving manufacturers incentive for job creation in the United States and protecting the country through homeland security initiatives.

Through it all, Senator Stabenow has maintained a strong commitment to the people of Michigan. For both her political contributions and her role as a trailblazer for Michigan women, Senator Debbie Stabenow is much deserving of induction into the Michigan Women’s Hall of Fame.