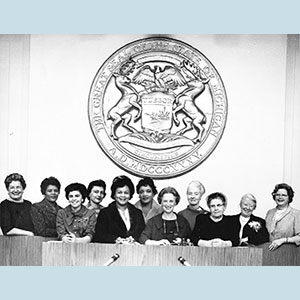 The women, five Democrats and six Republicans, were elected from districts across the state. Identified in the official record by occupation, they included: five homemakers, four teachers, two attorneys, one realtor, and one union representative. All had distinguished themselves with extensive participation in civic and political organization and the leadership positions they attained within those groups, such as the LWV, BPW, AAUW, YWCA, NAACP, WLAM, and the two major political parties. Women were appointed to 11 of the 14 convention committees, but as was typical of the times, none was appointed to chair a committee, and only three served as vice ‘chairmen.’

After the convention, several of the women delegates served in other political offices, such as the state legislature and gubernatorial commissions, or received statewide recognition from notable organizations. The success of the Con-Con Eleven encouraged more women to run for statewide public office, making women a greater and more powerful voice in the governance of our state.