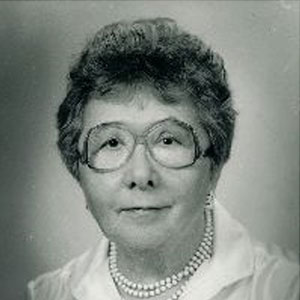 Dr. Clara Raven, Colonel AUS-Retired, and Deputy Chief Medical Examiner of Wayne County, Emeritus, was a true pioneer for the advancement of medical knowledge as well as for the achievement of women. After graduating from the University of Michigan with bachelor and master’s degrees, she became the only female student in her freshman class at Duke University Medical School. She then transferred as a sophomore to Northwestern University Medical School under a quota system that allowed only four female students into the Medical School. She graduated with an M.D. degree in 1938.

At the brink of World War II, Dr. Raven was a John Garrett International research fellow at the University of Liverpool, England (1938-39). Immediately after her return, World War II began in Europe and she volunteered to serve in the U.S. Army, but was not accepted until legislation was passed to admit women in 1943. Dr. Raven was among the first five women physicians commissioned. She served in Europe during World War II and later in the Far East during the Korean War. As chief of laboratory services in general hospitals, she was involved in the research of hepatitis infections in servicemen in Europe and in the research of hepatitis and epidemic hemorrhagic fever in Korea. She attended the Nuremberg trials in Germany and served briefly at the Atomic Bomb Casualty Commission in Hiroshima, Japan.

While on duty as a tissue pathologist at the Armed Forces Institute of Pathology in Washington, she co-authored a Japanese textbook on histopathology. In 1961, she became the first female physician to achieve the rank of full colonel in the Army Medical Corps.

Clara Raven became Deputy Chief Medical Examiner of Wayne County in 1958. Her greatest challenge was her more than 20 years research into the cause of crib death or Sudden Infant Death Syndrome (SIDS). In the early 1970s, Dr. Raven testified before a U.S. Senate subcommittee to encourage funding for SIDS research and counseling of the bereaved, but the cause and prevention are still evasive.

Dr. Raven received many honors, awards, and commendations including the Elizabeth Blackwell Award, the Michigan State Medical Flag Award, and the 1962 Northwestern Alumni Merit Award. Her name appeared in Who’s Who in the Directory of Medical Specialists, Who’s Who in Men in Science, and Who’s Who of American Women. She was the first female officer to become a member of the Military Order of World Wars and the Association of Military Surgeons. She was a member of many professional and scientific organizations and women’s and philanthropic associations.