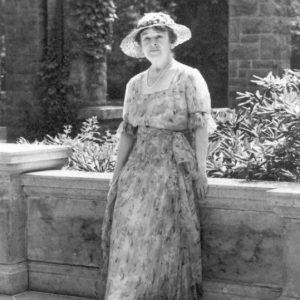 Through her philanthropic endeavors and own self-determination, Clara Bryant Ford (1866-1950) made it her life’s mission to improve the life and welfare of women and those in poverty-stricken areas across the country. Clara Ford and her husband, Henry, created and funded numerous programs that focused on women’s rights and self-sufficiency, education, healthcare, and environmentalism. Vista Maria, originally a home for orphaned girls, the School of Nursing and Hygiene at Henry Ford Hospital, Planned Parenthood (1945-her death). They also supported several small liberal arts colleges such as Berry College, Vassar, and Radcliff.

Born into a farming family, Mrs. Ford was an avid gardener and promoted the idea of urban gardens during the Great Depression amongst the Ford Motor Company employees. She donated food grown on her family’s farms to more than a dozen institutions on a weekly basis. From 1924-1932, Mrs. Ford served as president of the Women’s National Farm & Gardens Association during which time she created a “Roadside Market” campaign that encouraged rural women to sell their home-grown produce at roadside stands, enabling them to earn their own income.

Clara Ford was also active in the suffrage movement. By 1918 she was an outspoken advocate and organizer for women’s suffrage campaign, serving as Vice Chair of the Dearborn branch of the Equal Suffrage League of Wayne County with meetings being held frequently at her Fair Lane home. In 1921, she served on the Board of Directors of the Michigan League of Women Voters.