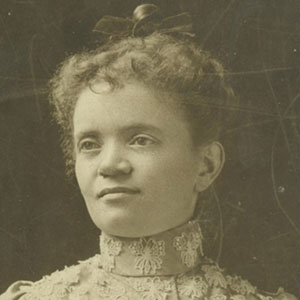 Charlotte “Lottie” Wilson was a nationally renowned artist and suffragist. She was the first African-American to graduate from the School of the Art Institute of Chicago. Lottie created busts of famous African-Americans such as Frederick Douglass and Phillis Wheatley. In 1892, she gifted a painting of Charles Sumner to Provident Hospital in Chicago and in 1894, a painting of Booker T. Washington to the Tuskegee Institute. In 1901, Lottie exhibited her works at the headquarters of the Women’s Educational and Industrial Union on Niagara Square in downtown Buffalo, New York.

A dedicated advocate of women’s rights, Lottie gave talks about women’s progress at churches and art studios throughout the late 1800s. She spoke at the first annual convention of the League of Colored Women in Washington D.C. (1896) and the Michigan Equal Suffrage Association convention (1898). In 1899, Lottie served as the Bay City representative at the National Women’s Suffrage Association Convention in Dunkirk, New York. In 1897, she helped establish the Phillis Wheatley Home in Detroit, a chapter of the national African-American women’s club that provided lodging, educational and recreational programs, and a forum for discussing political issues.

After divorcing her husband, Lottie moved her art studio to Washington D.C. and in 1902 painted President Lincoln with a Former Slave, depicting her interpretation of the iconic 1864 meeting of President Lincoln and Sojourner Truth; an earlier painting depicting a similar scene by Franklin C. Courter was destroyed in a fire that same year. President Theodore Roosevelt displayed Wilson’s work in The White House, making Lottie the first African-American to have her work exhibited there.