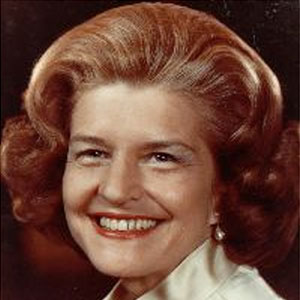 Betty Ford’s life has been constantly mirrored in the national press. Under the circumstances, Mrs. Ford might have confined herself to a social-cultural leadership role (a role for which she was especially well qualified as a former member of the Martha Graham dance troupe), but she opted instead to devote herself to public causes such as the Equal Rights Amendment which she strongly supported. In addition, Betty Ford has been very much involved with the American Cancer Society, the Arthritis Foundation, and national programs for mental health and underprivileged children.

Betty Ford has become best known for her courage and candor in coping with personal crisis. When stricken with breast cancer, Mrs. Ford faced the situation openly, and in so doing gave courage to others. Her public acknowledgments of cancer not only called attention to the dangers of the disease for women, but also to its means of detection and treatment.

It is for her personal struggle with alcohol and drug abuse that Betty Ford had become most widely known and appreciated in later years. Mrs. Ford overcame a serious problem of dependency through exercise of will and courage. The overcoming of her personal problem was not alone sufficient for Mrs. Ford. As with her cancer, Betty Ford sought ways in which to share her experience with others in a very public and beneficial way. Not only has she devoted her life to helping others with drug dependency problems, the funds she has raised through her speaking engagements and other public appearances have served to build the Betty Ford Center for Drug Rehabilitation at the Eisenhower Medical Center in California (dedicated October 3, 1982). As President of the Betty Ford Center, Mrs. Ford has become a lay expert on the problems of drug abuse and has provided courage, understanding, and treatment to countless thousands of individuals who have taken her personal example to heart. And, for this she has been given personal citations by the California Medical Society and numerous other organizations.