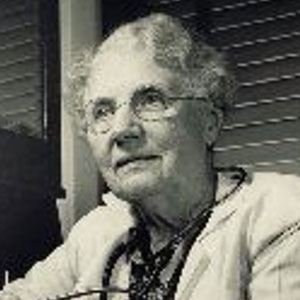 Bertha Van Hoosen, a member of a prominent early family in Oakland County, was born on the family farm in Avon Township. She graduated from the University of Michigan Medical School in 1888, having worked her way through school following a dispute with her family over the education of women in the professions.

At a time when women doctors were exceedingly rare, Dr. Van Hoosen managed both a private practice and a position as Professor of Medicine at the Women’s Medical College of Northwestern University (1891-1902), at the University of Illinois (1902-1912), and as head of the Department of Obstetrics and Gynecology at Loyola University (1919-1937). She was also the first woman to serve on the Cook County (Chicago) medical staff (1913-1920) and for years worked to secure equal treatment of women in medicine. She was particularly distressed prior to World War II that women doctors could not be fully commissioned in the armed services in the same manner as male doctors.

Her early experiences of discrimination as a woman doctor led her to found and become the first president of the American Women’s Medical Association, which became a viable alternative to the male dominated AMA.

Noted as a surgeon, Dr. Van Hoosen practiced her profession for most of her 89 years. She opened her first practice in Chicago in 1892 as an emergency physician at the Columbian Exposition and actively maintained that practice until February of 1950, performing her last operation in Pontiac at the age of 88. In 1947, she was elected an honorary member of the International Association of Medical Women, a distinction she then shared with only one other woman, Madame Curie.

Dr. Van Hoosen lectured widely on medical subjects during her career, speaking out against alcohol and drug abuse and in support of breast feeding of babies. Her interest in the practice of obstetrics and gynecology led her also to pioneer in the use of scopolamin morphine (Twilight Sleep).

Although much of her career in medicine was conducted in Chicago, Dr. Van Hoosen regularly returned by bus to the family farm of Stony Creek, north of Rochester, for visits with her distinguished niece, Dr. Sara Van Hoosen Jones and her older sister, Alice Van Hoosen Jones. It was at Stony Creek that Dr. Van Hoosen died. The story of her career and achievements are well chronicled in her 1949 autobiography, Petticoat Surgeon, which should be required reading for women entering upon the practice of medicine today.