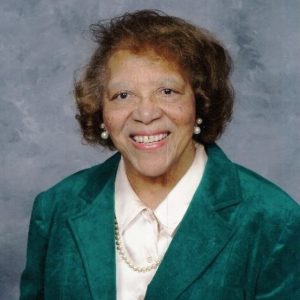 Bernice Morton, Ph.D. has dedicated more than 60 years to nursing as a practitioner, educator, and community activist for minority women in nursing. As a young girl, Dr. Morton dreamed of becoming a nurse at a time when African American women were not admitted to nursing programs in Michigan. Undeterred, she went to New York, obtained her nursing diploma, and returned to Detroit. She became a Public Health Nurse, serving minority populations in Detroit.

Dr. Morton continued her education by earning her BSN (1948) and MSN (1961) from Wayne State University and a Ph.D. in Education from the University of Michigan (1980). In 1968, working with members of the Regional Medical Programs of the Medical School at Wayne, she helped plan and develop the first Model Cities Comprehensive Health Care Center in the U.S. and served as the program’s first nursing director.  Dr. Morton was the first African American to achieve tenure at Wayne State University School of Nursing, where she developed an affirmative action plan for minority students that was later published as a model for other nursing schools. She was also the first African American chairperson of the Public Relations for the Michigan Nurses Association.