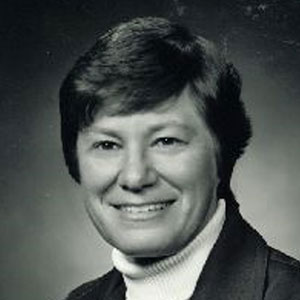 Born in Lansing in 1936, Ardeth Platte was educated at Aquinas College in Grand Rapids and entered the Dominican order in 1954. She has devoted her life to resisting violence in all its forms, from the violence of poverty and injustice to the worldwide violence of militarism. Her supporters remind us that “she always thinks globally and acts personally, whether she’s protesting nuclear weapons or serving soup to the hungry.”

In 1967 Ardeth helped to establish and then direct St. Joseph Alternative Education Center in Saginaw, an inner-city school for those no other school wanted. She also served twelve years on the Saginaw City Council, where she is remembered particularly for diversifying the membership of all city boards and commissions. The Saginaw News summarized her tenure by writing, “She gave the council . . . a genuine conscience and purity of purpose, supported by a high intellect.” In 1973 she received the Saginaw County Bar Association’s prestigious Liberty Bell Award.

In 1976 Sister Ardeth directed a Women’s Leadership Conference where the social problems of women were analyzed, and within two years, the Rape Crisis Center and a home for battered women had been founded. Also in Saginaw, she started the Home for Peace and Justice, a center which makes the connection between poverty and injustice on our city streets and the militarism of our national priorities. After helping to found the Michigan Faith and Resistance Movement, Sister Ardeth moved to Oscoda, Michigan, with fellow Dominican Carol Gilbert. There they worked peacefully to transform Wurtsmith Air Force Base, which deployed bombers equipped with nuclear warheads. After the base closed, she moved to Gwinn, Michigan, and demonstrated against K.I. Sawyer Air Force Base, which also subsequently closed. At the time, Michigan was sixth in the nation in deployment of nuclear weapons, but Sister Ardeth’s prayerful, peaceful presence was significant in ridding the state of their presence.

In 1995 Sister Ardeth joined the national resistance movement by moving to Jonah House in Baltimore, Maryland. From that base, she participated in Plowshares Actions, which follows the biblical injunction to “beat swords into plowshares.” Ardeth has been imprisoned numerous times for her peace actions, but says that incarcerations only deepen her commitment to walking with and empowering the poor and oppressed and working for an end to all violence.