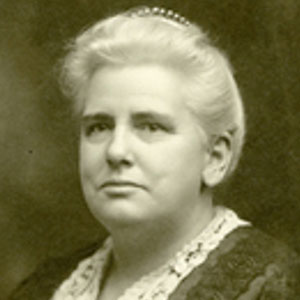 Anna Howard Shaw (1847-1919) was born in England on February 14, 1847. At the age of four, her family moved to New Bedford and then to Lawrence, Massachusetts. In 1859, however, her father suddenly moved the family to a wilderness tract just north of Big Rapids, Michigan. There the young woman first learned to cope with adversity. She later attended school in Big Rapids, and in 1873, enrolled in Albion College.

In 1876, Shaw entered the School of Theology at Boston University, thus fulfilling a lifelong dream to become a qualified minister. She was the only woman in a class of 42 men. In 1879, she graduated and took a church on Cape Cod. The next year she became the first fully ordained woman minister in the history of the Methodist Church. While engaged in an active ministry at two churches, Shaw also successfully pursued another advanced degree at Boston University, graduating from the School of Medicine in 1885.

Later Shaw became a lecturer for the temperance movement and enlisted in the cause of women’s suffrage. Her long association with Susan B. Anthony followed. She became Anthony’s chief lieutenant in the National American Woman Suffrage Association and succeeded her as president of the Association in 1904. Between 1904 and 1915, Shaw alternated as president of the association with Carrie Chapman Catt, an equally well-known activist. Her position enabled her to lecture worldwide in support of women’s rights.

Shaw’s leadership role in the women’s movement led to her appointment in 1917 as chair of the Women’s Committee of the Council of National Defense. As a result of her work on the Council, she became the first woman ever to receive the Distinguished Service Medal, which was conferred upon her by President Woodrow Wilson.

Anna Howard Shaw died in 1919 while on a lecture tour for world peace. Her death came just a year before ratification of the 19th Amendment, for which she had labored most of her adult life.