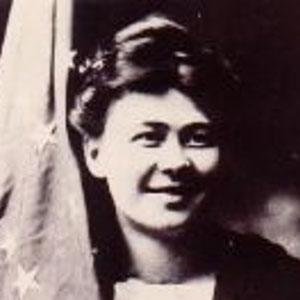 Anna (“Big Annie”) Clemenc (1888-1956) played an instrumental role in shaping the labor movement in Michigan. Through her sheer bravery and commitment, she risked her own well-being by fighting for social and economic justice during the famous 1913 miners’ strike against the Calumet & Hekla Mine located in Michigan’s Upper Peninsula. The strike began July 23, 1913, and ended nine months later on April 13, 1914.

Clemenc, a Calumet, Michigan native, was devoted to the active participation of women outside the traditional confines of the home. Having graduated from eighth grade, she was a relatively well-educated woman at that time. Clemenc was an avid follower of Eugene Debs, Mother Mary Harris Jones, and the tenets of socialism. It was her independent nature and strong-willed character that inspired many men and women to take a stand for justice.

In 1913 miners on Michigan’s Keweenaw Peninsula (U.P.) were subjected to hazardous working conditions and extremely low wages. Members of the Western Federation of Miners, many of whom were immigrants, held a massive labor strike in hopes of improving their impoverished conditions. Clemenc, the wife of a Croatian miner, helped organize the Woman’s Alliance in support of the miners’ cause. She marched on a daily basis and often displayed the U.S. flag as a reminder of the fundamental rights of each American citizen. Clemenc was arrested and jailed twice as a result of her persistent efforts.

Although the strike was eventually stifled, the legacy of courage and determination lives on. Clemenc herself is one of three women featured on the Michigan Women’s Hall of Fame medallion, representing women’s early struggle for economic justice. This emblem honors those women who have selflessly worked to better humankind. Michigan’s labor movement evolved drastically as a result of this strike. Clemenc and those who followed her leadership serve as an inspiration for working-class generations to come.

The Michigan Women’s Studies Association commissioned a portrait of Annie by Andy Willis of the Miners’ Art Group. That portrait was unveiled in the Capitol Rotunda on a Day of Tribute to Anna Clemenc. It now hangs in the Michigan Women’s Historical Center and Hall of Fame in Lansing.

A biography of Anna Clemenc, Tall Annie, by Virginia Law Burns received the Award of Merit from the Historical Society of Michigan.