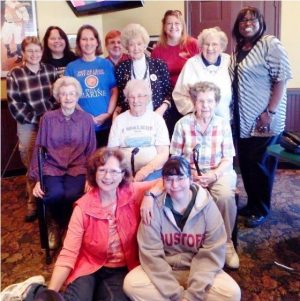 American Legion NUWARINE Post 535 is Michigan’s last remaining all-female American Legion Post. Post 535 was organized on November 25, 1946 in Lansing, Michigan by a group of 22 female WWI and WWII veterans who felt they should have their own American Legion Post. The name “NUWARINE” is an acronym taken from the organizational branches of the charter members (Army/Navy) NUrses, WAves, WAcs, WAfs, spARs and marINES (USMCWR).

Having received their Temporary Charter on December 19, 1946 and their Permanent Charter on November 3, 1947, Post 535 has welcomed over 100 women veterans from all service branches and has the unique mission of educating others about women in the military including through exhibits, youth programs and other patriotic endeavors. Many Post members have gone on to serve as officers in the American Legion’s Department of Michigan.

In the early years of the Post, a variety of activities were held such as raffles, dances, and the American Legion Auxiliary poppy sales. In recent years activities, have included an annual youth trip to Washington D.C., including a visit to the Women in Military Service for America Memorial, Arlington Cemetery and Capitol Hill and “Women Veterans’ Stand Downs,” which brings female veterans and social service organizations together in an effort to improve their well-being. The Post has received many awards and distinctions over the years related to their service to veterans and the community including Most Distinguished Citation (9 times between 1953-1983), “Post of Tomorrow” (1964), Americanism Citation (24 times between 1954-2008).