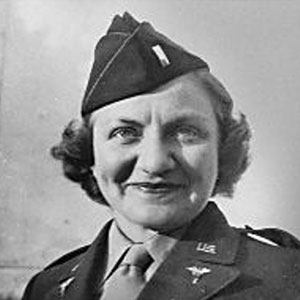 “For outstanding proficiency and selfless devotion to duty,” reads the citation accompanying the Distinguished Flying Cross presented in December of 1944 to First Lieutenant Aleda Lutz of Freeland. She had volunteered for duty with the 802nd Medical Air Evacuation Squadron, the first of its kind. Lutz had recorded 814 hours in the air when the C47 hospital plane evacuating 15 wounded soldiers from the battlefront near Lyons in France crashed killing all aboard.

Aleda E. Lutz is one of the most celebrated women war heroes of World War II. As a First Lieutenant Army Flight Nurse she flew 196 missions evacuating over 3500 men. She also logged the most flight hours of any flight nurse. She earned six battle stars before her death, and she was recorded as the first military woman to die in a combat zone in World War II. Lutz was awarded the Air Medal four times, the Oak Leaf Cluster, the Red Cross Medal, and the Purple Heart. She was also the first woman awarded the Distinguished Flying Cross in a World War, our nation’s second highest military honor.

A Veteran’s Medical facility located in her hometown of Saginaw, has been named after her by Congressional Decree. The congressional resolution was first offered in 1949, but died in committee, mainly because she was a woman. Though the building was completed in 1950, it was not until August 15, 1990, that it was officially named. The United States Army Hospital Ship and a C-47 plane have also been named in her honor. With the exception of the Civil War Era Doctor Mary Walker, these honors make Aleda E. Lutz the highest decorated woman in the history of the United States of America.