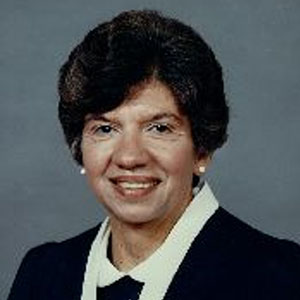 Agnes Mary Mansour distinguished herself in the corporate, academic, religious, and political arenas as professor of chemistry and president of Mercy College of Detroit, and as a member of the board of directors of Michigan Bell Telephone and the National Bank of Detroit. She also was a 1982 candidate for Congress (17th District), director of the Michigan Department of Social Services, and founding director of the Poverty and Social Reform Institute.

As the youngest of four daughters of Lebanese immigrant parents, Mansour grew up on Detroit’s east side. She graduated from Mercy College in 1953, joined the Sisters of Mercy, and went on to earn a master’s degree at Catholic University and a doctorate in biochemistry at Georgetown University. She would have been a doctor, but at the time the Vatican did not allow sisters to go into medicine. She was associated with Mercy College of Detroit for 34 years, as a student, resident advisor, chemistry instructor, winning basketball coach, and as president for 12 years. Colleagues described her as a soft-spoken but firm administrator with a deep sensitivity to people’s problems and a keen sense of humor.

Mansour became a national symbol during her first year as director of the Michigan Department of Social Services when controversy arose regarding her role as a nun and that of a human services administrator of Medicaid funding for abortion. She was given an ultimatum by a papal emissary to leave the Department of Social Services or leave the Sisters of Mercy. She chose the latter.

Beyond her accomplishments as director of the Michigan Department of Social Services, Mansour took every opportunity to educate elected officials and the public on the growing feminization of poverty. She endeavored to make the Department of Social Services more responsive to the needs of the poor, especially women and children, and raised the consciousness and concern of all citizens for the less fortunate.