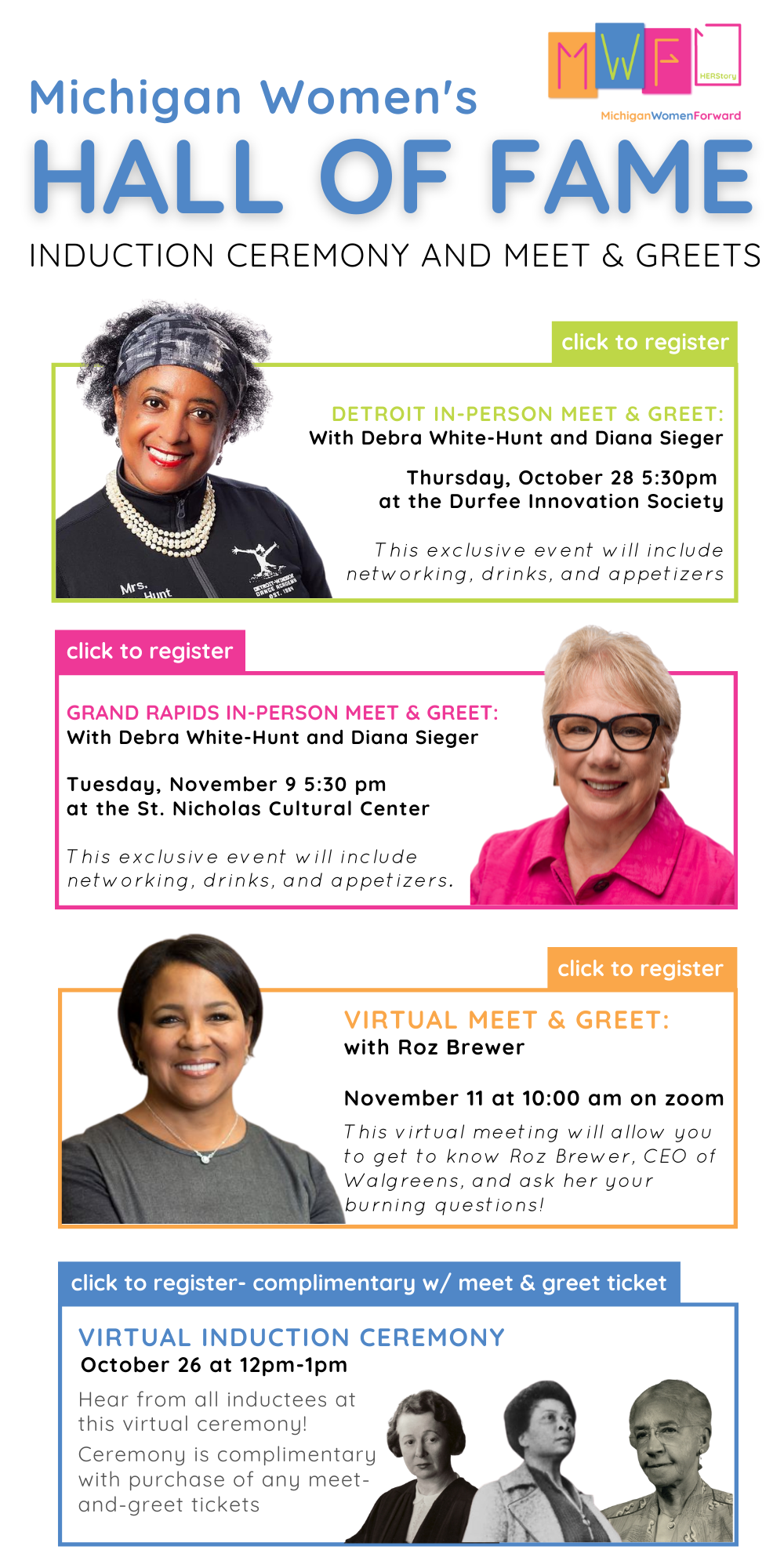 Thank You to our Sponsors!

Meet our 2021 Hall of Fame Inductees!

With her appointment in 2021, Roz Brewer became the only African American woman CEO of a Fortune 500 company.  She was also the first African American to lead a Walmart division as president and CEO of Sam’s Club. While at Sam’s Club, she made a $13.6M commitment to women and minority business owners by increasing their access to capital via the company’s Small Business Economic Mobility Initiative. This commitment to marginalized communities through the creation of diverse and inclusive workforces has been a consistent theme for her in all her leadership roles.

Diana R. Sieger is the President of the Grand Rapids Community Foundation, a position she has held for nearly 34 years. Under her leadership, the assets have grown from $35M to nearly $400M. She has also led the GRCF in the creation of initiatives such as the LGBTQ Fund, African American Heritage Fund, and the Challenge Scholars Program. She is known to be outspoken within her community on many issues relating to gender equity and is stated to have prioritized racial justice within the GRCF which has positively influenced other foundations.

Debra White-Hunt is the Co-Founder and Artistic Director of The Detroit-Windsor Dance Academy.  She has been awarded several honors for her community development work including being granted a Milken National Educator Award, being named Michiganian of the Year, and being named a Crain’s Notable Woman in Non-Profits.  She also was awarded the Kennedy Center Fellowship and Kresge Arts Fellowship. Debra established the DWDA mentoring program which has trained 300+ student dancers in classroom assistance and business assistance. From this program there have been 10+ young women who have opened successful dance studios throughout the greater Detroit community and country, and several students have realized their love for teaching through being a student assistant and are now teaching locally and throughout the country and world.

Sarah E. Ray was an African American civil rights activist who in 1945 was denied entry on a ferry operated by the Bob-Lo Excursion Company. She initiated a legal battle against the company via the NAACP which eventually ended up being processed by the United States Supreme Court. The court ruled in Ray’s favor, setting her case as a precursor to Brown v. Board of Education. After the Bob-Lo Co. vs. Michigan court case, she went on to create the Action House in Detroit which helped to empower Black youth in the city and offered spaces for recreational activities.

Judge Lila Neuenfelt (1902-1981) was the first woman circuit court judge in Michigan and at the time of her swearing in, was the youngest woman in the U.S. to become an attorney. She is known for fighting for married women’s rights to use their birthname in professional capacities and for mentoring other women lawyers and judges as they rose in their careers, including Michigan Women’s Hall of Fame Inductee, Judge Cornelia Kennedy.

Fannie B. Peck was the first president of the National Housewives League and founder of the Detroit Housewives League, where she led a team of women determined to create better conditions for their communities and the next generation of women. She created the Fannie B. Peck Credit Union which gave African Americans in Detroit the chance to create financial legacy, start their own businesses, buy a home, and send their children to college. She also created the first cemetery for African Americans in Detroit and picketed the Midwest meatpacking industry to allow average citizens to be able to afford meat for their families.